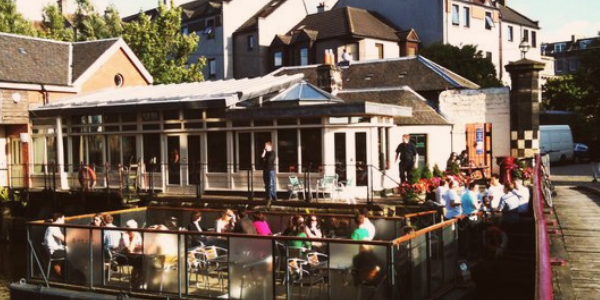 Teuchters Landing is a traditional style freehouse in the popular shore area of Leith. The pub is the former waiting room for the Leith to Aberdeen steamboat ferry and has a large beer garden & pontoon that fill up quickly with lots of people. Three years ago, Teuchters started working with Jamezz and since then they use the QR order application, which changed their business completely.

“Jamezz truly revolutionized our business.” says John Trial, owner of Teuchters. “We’ve rebuild our business from two kitchens to one, from two restaurants to one and now we have one big bar. Because of using Jamezz QR ordering application, we make the same revenue as before, with way less seating. And that’s not all. We also got less staff working now, but we have more runners than before. Bottom line we can say that the staff costs are reduced.” 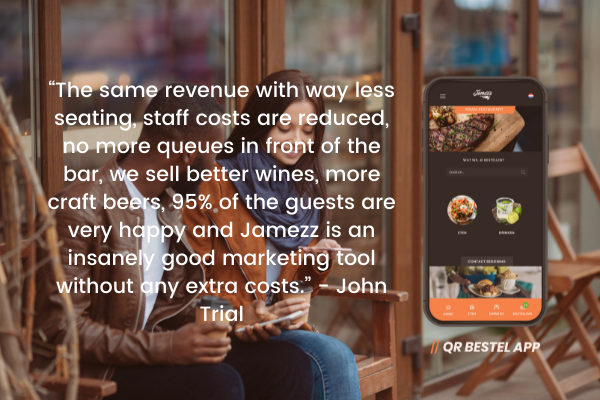 Jamezz applications give you the opportunity of driving your sales without any marketing costs. You can easily promote your specials and favourite selling products by using the banner from the app or use an extra category in your menus, highlighted buttons, videos, pictures and more. John: “We created a banner for a new mix drink and sell over 500 cocktails in a very short time. Also since we use Jamezz QR order app we sell better wines, more craft beers and promoted items up to 50% more than before. Without any balloons, social media or any other marketing tools. Just the QR app and that’s it. “

95% of the guests are delightful about THE jamezz QR ORDER APP, including our staff

“By our estimation, we’d say that at least 95% of the guests are delightful about using the QR order app. They found it super easy, very clever and helpful. Guests have their orders in three minutes on their table. And they have to pay in advance, so the number of people that runs away without paying increased immensely. The customer satisfaction is very high, people order more in a shorter time and they actually love it, because we use humour, we give explanation of drinks in the app and they can order whenever they feel like. It’s super clear for everyone, including for out staff. So yes, Jamezz has become a major asset for our business.” Leave your contact here and let Joost get in touch with you for a free consult for your business..

// TALK WITH OUR EXPERtS